Henry Clay Ginter was born June 11, 1842, the son of Henry Clay & Maria Schmidt Ginter, and died March 1, 1925. He was the husband of Ellen Berkheimer Ginter, whom he married April 1, 1869. He often went by his middle name, and one source claims his full name was William Henry Clay Ginter. In 1860, he was a butcher living in York Borough and later served as constable as did his brother Franklin Perry Ginter, a comrade with the 87th Pa Inf.

He enlisted in York August 24, 1861, with Co. A, 87th Pa Inf, at the rank of private. Captured at the battle of Carter’s Woods June 15, 1863, and imprisoned at Belle Isle in Richmond. Was back with the regiment by October. Wounded at the battle of the Wilderness May 6, 1864. Captured again at Newtown, Virginia, on the way home to be discharged and imprisoned for seven months, most of it at the stockade at Salisbury, North Carolina. A note in his compiled military service records says he “joined the Rebel Army,” which does not appear to be true. Paroled March 1, 1865, at Northeast Ferry, North Carolina, and honorably discharged April 25, 1865. 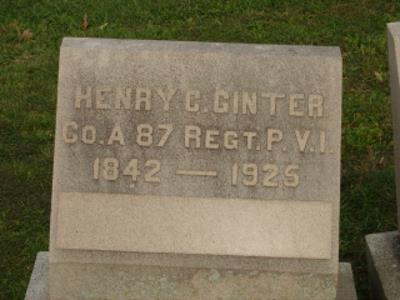